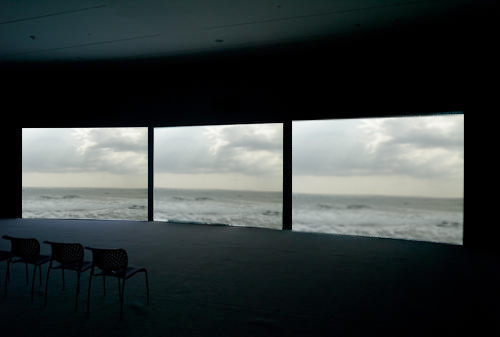 Collective Emotional Perception offers visitors an experience where the emotional response of participants is evaluated by intelligent video analysis technology. The collective emotion is measured during the viewing of a video that is continuously transformed with the results of emotional experiences of public. Imagine an exhibition room where all the walls are covered with the projection of a film showing the sea. The film shows a calm sea if people present in the room has positive emotions. But when public have negative emotions the film is slowly transformed to a stormy or tempestuous sea.

There are two areas of exhibitions:

Emotions Exposed inside the room where the visitor acts and experiments with the visual enviroment that shows in real time the tracking parameters.

Passive area where public in general could follow the act of participating in room A.

The process of interaction between spectators and art works is a key of our artistic proposal. This interaction is achieved through the use of sensors and software that we have developed specifically for the events in order to enable participation in an easy and intuitive way. All communication models suffer when they generate little involvement. Therefore, we have designed a process of interaction that allows us to value the participation of the audience. During the last years, a considerable amount of researchers have become interested in the development of new interfaces that follow the human-human model of communication. These interfaces must be able to receive and analyze also affective information that comes from different input channels: image, video, audio, tactile, position trackers, biological sensors, etc. We are following the principles of Natural Interaction, that intend this relationship to be as natural as possible, developing software systems that take into account gestures, spoken dialogue between man-machine, even assessing the reaction you're having at the computer (if you get bored, do not pay attention) to act accordingly.

Scientific Research has confirmed that emotions play an essential role and are fundamental to human experience, influencing cognition, perception and everyday tasks such as communication and even rational decision-making. Human computer interaction (HCI) systems capable of sensing user affective state and giving adequate affective feedback are, therefore, likely to be perceived as more natural, persuasive and trustworthy. CEP maps facial expressions. The installation uses a scientific approach, developed by Professor Paul Eckman, who concluded in the 70´s that some basic expressions (like the ones associated to happiness, fear, surprise,..up to 6) are biologically universal in the human species, regardless of age, race or gender, and can be measured and coded analyzing several facial features. CEP software is capable of detecting the relevant facial features and deduce the underlying emotion. What we propose to the audience is a collective experience where their emotions impact directly what is happening in the showroom. When people access to the room, CEP tracks their micro-facial-expressions, infers the associated emotions and acts consequently. As an example, imagine a film being projected in 3 room walls. If the sum of the emotions of people present are positive (happiness, surprise,…) the film is slowly transformed to “peaceful” and “quiet” scenes. If the emotions are negative, the film is again transformed to show “violent” and “aggressive” scenes and if the audience emotions are neutral the film remains unchanged. A nice example could be a sea film where different sequences could change from a calm to a stormy sea.

We are open to any interpretation of the audience aesthetic experience that establishes a real dialogue with the piece. The participants, as a collective group, become the creators of their own spectacle. The relativity of the system that is conditioned to the observer can be interpreted as a reflection of the world images, a representation of a collective vision, the reality built from our emotional perception. Humans like to think that the nature of what is happening is the result of human action, the old aspiration of dominion over nature. This installation illustrates it by implementing a metaphorical transformation of virtual spaces making changes that are substantial for our perception, and proposes a new class of dialectic and emotional communication that can be a stimulus to interact through somehow “un-logical” or “irrational” feeling.