The possibilities of digital art or new media art are endless. Among them, 3dinteractivo dedicates its work to proposals where the public participates and acts on the final piece. In other words, the artistic proposal is completed with the participation of the public. This process of inter-action between the spectator and the artistic installation (interactive art) is one of the keys of the 3dinteractive projects, and is achieved through sensors and software that the group develops specifically by using the latest technological advances and encouraging experimentation and participation. Thus, the public can experiment from another perspective with complex technologies and interpret scientific data in a visual way.

Every technology produces a change in the way we live and understand reality. Today we have complex, innovative technological environments at our disposal as well as works based on the experimentation and studies of Universities around the world. All that knowledge is available to be shared not only by technologists, but also by artists.

In a context of questioning many artistic structures, the 3dinteractivo Group wants to claim the role that Art can and should occupy in knowledge and research (R&D), providing artistic proposals with the most innovative technological environments, encouraging the experimentation of the public, addressing current issues such as Artificial Intelligence or the future of creative and artistic processes with Computational Creativity and proposing other forms of relationship with Technology through Art.

The group began its journey in 2001, dedicating its first studies to the development of 3D visual applications with a fundamentally educational vocation. Among the productions of this first stage, “The Planets Explorer” stands out, a virtual planetarium application that shows a photo-realistic interactive representation of the Solar System.

In 2010, the group decided to redirect its activity towards the art world, beginning a research stage that led to the production of its first participatory artistic installations. In 2013, in the context of the MADATAC 05 festival, the group exhibited in the exhibition room of CentroCentro in the Palace of Communications of Madrid, the interactive work “Emotional Perception”, an installation in which the viewer was emotionally evaluated with an invisible technology that mapped the micro-expressions of the face and measured their emotional response to the audiovisual pieces selected for the the MADATAC Festival, becoming pioneers in the research and development of an Artificial Intelligence algorithm dedicated to an artistic installation.

The work “| _YES_NO |Performance Installation”, which was exhibited at the Korea Foundation in Seoul in 2016, is another example of an interactive installation created by the 3dinteractivo collective. In it, the spectator was invited to perform a performance with gestures of nodding and / or shaking his head, weighing the time according to the relevance that the act of affirming or denying had in his daily life. The participants were recorded for 30 seconds and their images mixed with the performances of other spectators in a mosaic where you could collectively compare how different or similar to others you are.

In May 2017, the group presented their work at the TECHNARTE 2017, International Art and Technology Conference in Bilbao, with a presentation entitled “Art generated by the public- The idea of experiencing”.

The Monastery of San Juan in Burgos hosted LIBRARTE in April 2018, where the collective presented, together with Iván Ferrer Orozco, the works “Sketches of light” and “turning pages”. Sketches of light presents the visitor with a space that represents the head of an artist when facing a blank sheet. The projectors draw with light the evanescent ideas of the artist who seeks inspiration from multiple resources. Simulating electrodes that read chain thinking, synchronized sensors will allow the visualization of the sequences of the video that are projected depending on the position of the viewer. The observation itself elaborates therefore the form giving light and focus to the image, which is shown on a headband-shaped set with nine blank notebooks. Additionally, the central axis of "turning pages" is to explore the immense audiovisual resource of books by artists on platforms such as YouTube. An unconventional display format or process where the physical book is exposed virtually by acquiring a new form of representation. The object, the book, is transformed into a process by adding new elements to the image, like the artist's hands turning their pages.

DATA | ergo sum installation, exhibited as part of the Exhibition "Beyond 2001: Odyssey of Intelligence" in the Space “Fundación Telefónica”, Madrid October 2018 thru February 2019, represents another incursion of 3dinteractivo group in the world of Artificial Intelligence applied to Art. The approach that runs the DATA | ergo sum installation is to make visible the amount of data that can be extracted by a vision machine that observes us and the consequent application using Artificial Intelligence technologies. With a panoptic eye, the installation observes and records the behavior of the viewers without them being aware that they are providing an overwhelming amount of data; around 20,000 in just 20 seconds. This personal bigdata is treated by AI algorithms that interpret raw information by adding layers of value as the 6 emotions that psychologist Paul Ekman defined as basic in his study of facial expressions. The installation shows with a visual metaphor of connections and data how computer machines with Artificial Intelligence capabilities work and think: they reduce the individual to a sequence of information.

The installation tours during 2019 with the exhibition at the MEH Museum of Human Evolution in Burgos.

In March 2019, the group takes up the line of research in emotional evaluation and creates the “CEP Observable Realities” installation, in which a video projection becomes a canvas, a support on which to interact, operate and build images with the indirect information obtained from sensors that monitor the position of the spectators individually and as a group. Their involvement / attention, their facial expressions (eg, smile, frown) even their emotions (surprise, happiness, fear) ultimately generated and transformed the audiovisual piece whose projection was unique; only dependent on the viewer's interaction in the room in real time. This installation was exhibited in the National Taiwan Museum of Fine Arts of Taichung (Taiwan)..

OBSERVABLE LANDSCAPES, Cortes de CyL 2020 and Museo de Palencia, 2021 is a project that is based on a videographic corpus of landscapes and inhabitants recorded in the province of Palencia. This material has been re-edited and post-produced to build from fragments with random algorithms, an experience that is an exercise in reinterpretation, of perception of places in memory. Landscapes will be a large digital panoramic canvas where events will take place inside and outside of it. The project won the Contemporary Creation Grant of the Villalar Foundation - Cortes de Castilla y León. 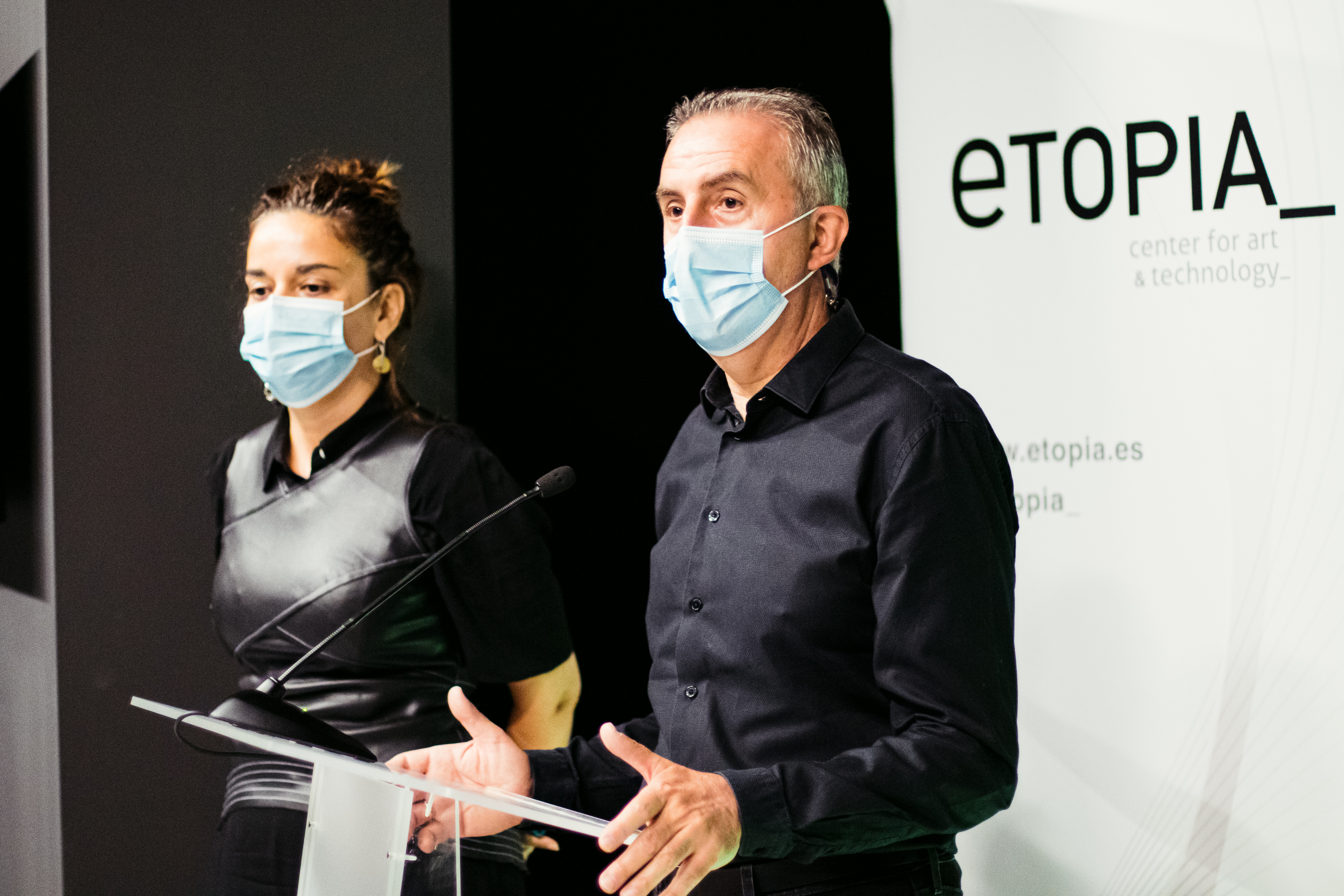 In March 2020, the group was residing at Etopia Center for Art and Technology to develop the _DRONIA project which was exhibited for four mounths in a solo exhibition "DRON__IA" end of 2020 and beging 2021. The work is an interactive artistic installation that exposes how machines see you with two state-of-the-art technologies: DRONES and Artificial Intelligence (AI).

DATA | ergo sum | RELOADED ”, Museum of Contemporary Art of San José (Costa Rica), LA Art Show of Los Angeles (USA), 2021 is an interactive Art installation that visualizes the capacity of vision machines that use Artificial Intelligence to extract data by a simple observation of the participants. With mirrors that attract attention by presenting a narrative, the installation observes and records the behavior of visitors without their being aware that their mere presence in front of a mirror is providing an overwhelming amount of data; more than 20,000 parameters are captured in just 20 seconds. This personal "big data" is processed by artificial intelligence algorithms that interpret the raw information adding layers of value, such as the basic emotions deduced from the facial expressions or the interpretation of the body language of the visitors. 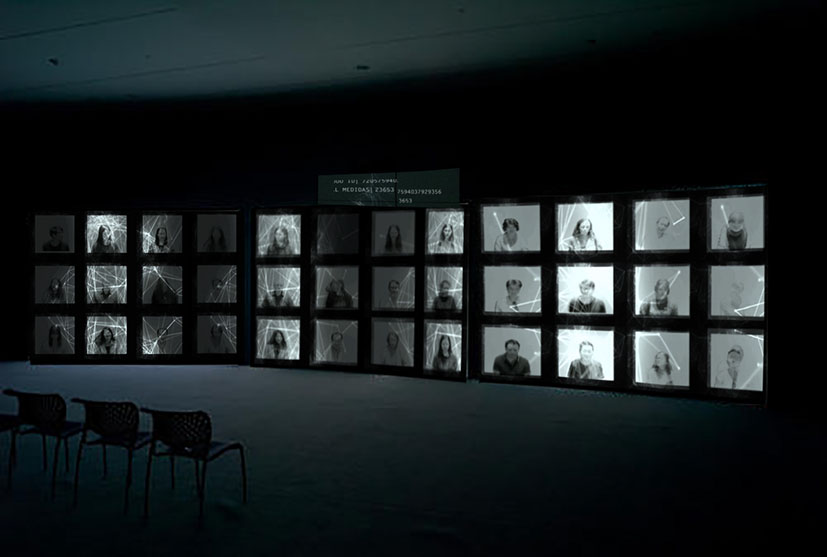 3Dinteractivo is a researching endeavor, seeking for a deeper understanding of the relationship among art, science and technology, by working on new ways of expression and communications in Arts.

Alfonso Villanueva is Industrial Engineer, expert in technological developments in Mobile Communications, Security systems and Internet. He investigates on new processes involved in the creation and production of the art installations and the impact of technologies in the way we perceive and experience them. He has participated in several art exhibitions in Spain and abroad.

Francisco Marcos Graduated in Computer Science from the Polytechnic University of Madrid.

Mariano Perez Industrial Engineer from the University of Zaragoza.